(for my dearest student Shih-Wei Huang)

Pianists playing Robert Schumann's Waldszenen ("Forest Scenes", or "Woodland Sketches") sometimes stumble upon the gruesome motto Schumann chose for the fourth piece, Verrufene Stelle ("Infamous Spot", or "Haunted Spot"). These two evocative stanzas stem from a poem by Friedrich Hebbel, Böser Ort ("Evil Place"). They tell us about a red flower that drank human blood from the earth. Here is the original German and my verse translation:
The first edition of the Waldszenen actually shows a grave:
(And I am quite sure that Miss Annette Preusser, the young dedicatee, was thrilled to find her name on that stone.) 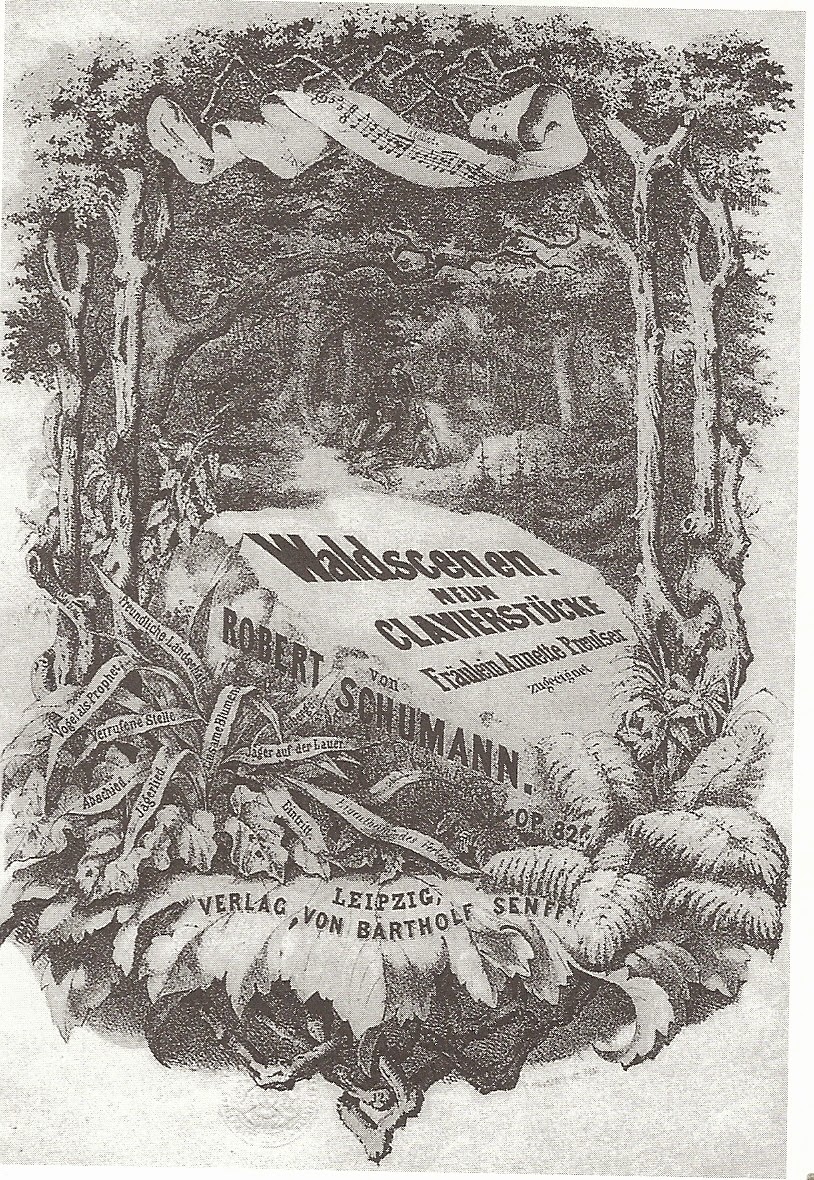 This, I believe, refers to the next stanza of Hebbel's poem (not included in the motto) which tells us that the red flower is growing on "my brother's grave":

You shall no longer be bragging
Upon my brother’s grave
In all your stolen purple,
I ‘venge him and break your stave!

The narrator breaks the flower and promptly a bird appears, mocking him: "The flower have you killed now, as nothing else was there."

Evil Place is the second poem of Waldbilder ("Forest Pictures"), a collection of four poems that appeared in Hebbel's Neue Gedichte ("New Poems") in 1848. Here is my verse translation of the four poems: 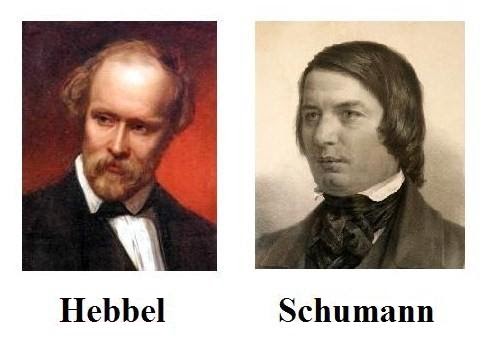 Forest Pictures
1. The House in the Woodland
I wandered alone in the woodland
And came to a small abode,
Through which God’s lovely angels
Quite noticeably flowed.
Small gardens, which sprawled around it,
Had apples and pears of all shapes,
A vine that stretched through the window,
Was loaded with fragrant grapes.
The mother suckled her youngster.
How rosy her cheek now shone
While she was bending above him,
It seemed to mirror his own.
Now plucks she the heaviest wine grape
Which tickles her shoulder with joy,
The grapevine wants to refresh her,
As she refreshes her boy.
Before her, on the table,
There stands a bottle of wine
Along with a cup to serve when
Her husband wants to dine.
A noise! – "Your father, youngster!"
She pours it to the brim.
Not yet! That pear has fallen
She wants to offer him.
I’d like to step before her,
There’s just some little time,
And speak: O let me drink now,
I’ll wander in rough clime!
She fain would hand me the goblet,
For him ‘twas meant to be.
I’d feel as if it was given
By Peace herself to me.
But no! I turn away now,
The woods are thick and queer,
I want to get lost into woodland,
Who steps into pictures here?!
2. Evil Place
Quite lost am I here in the forest,
And everything so still!
Black trees are crowding around me
With treacherous, guileful will.
They let me leave no longer,
Away! I want to race,
One speaks of evil places,
This is an evil place!
Here has much evil happened,
And more must happen here.
If he is not the victim,
Then man must commit it, I fear.
Tall as they grow, the flowers
Are pale here, as if dead.
Just one right in the middle
Stands there so dark and red.
Its hue is not from the daylight,
No sun has burned this bud,
Its red is from the earth bed,
And that drank human blood!
You shall no longer be bragging
Upon my brother’s grave
In all your stolen purple,
I ‘venge him and break your stave!
Behold, at my feet it is lying!
There glides a bird with glee,
Sits right across my visage
And whistles like mocking me:
"This place will let you leave now,
You gave it what is fair,
The flower have you killed now,
As nothing else was there."
3. Thick Forest
You again, you gloomy forests,
Full of murder, venom, death,
Where one never meets a guardsman,
But at times the robber’s wrath?
Belladonna offers warmly
Her sweet cherries, red and round,
And the serpent’s greenish eyeball
Blinks at me from swarthy ground.
With an adder as adornment
For her neck, and gloomy mien,
There she squats, a yellow maiden;
Yes, she is the serpent queen.
Ha! Here shall one gain in vigor,
And to life shall be attached,
Which by robbers’ sneaky bullets
Can so readily be snatched!
Though, indeed, I have no money,
But the robber trains his hand;
I myself shall, as the parson,
In advance forgiveness grant.
4. Situation
In the coolness of the grotto
Stands the hunter lad alone.
Hot it’s outside, and to slumber
Lies he down onto the stone.
And the sleep, forever mellow,
Closes soon his eyes with grace;
Lighter shadows of sweet dreaming
Fly along above his face.
Suddenly into the grotto
Steps a maiden, tall and slim,
Sees the sleeper, gently startles,
Hastily approaches him.
Wants to wake him, hears the footsteps,
Cries in fear: it is too late!
Makes a cross as if in prayer
Over him, to watch his fate.
In the den appears the poacher,
Sees the huntsman, on a whim
turning pale he grabs the rifle,
Cocks the hammer, aims at him.
Steps the maid before the brother,
But he mutely push’s her back;
And his gaze does sternly tell her:
Once he shot me on my track!
"Watch his slumber," says she softly,
"God protects his tender age,
He is guarded by an angel,
Don’t you feel it in your rage?"
He laughs out, but she is pleading:
"Look, he sleeps in quiet bliss!
Let him live till he awaketh!" -
That he curtly promises.
Silently he screws the flint stone
And the foe he wildly eyes;
She sinks mutely to the floor where
Pale as marble she now lies.
"Do you not believe in angels,
Are you one yourself?" cries she.
Ah, I’m praying - sighs the maiden -
That you shall no murd’rer be.
On the pan he pours the powder
And speaks surely, gloomily:
"I shall just become a murd’rer,
So that he no murd’rer be!"
All is silence, just the buzzing
Of a beetle from the rear;
Deeper grows it, and the sleeper’s
Gentle breathing can one hear.


Hebbel, Schumann and the Art of Allusion

Do the four poems of Friedrich Hebbel's Waldbilder tell a coherent story? That they are interrelated we certainly do feel; and not just by their common topic, the forest. Similar symbols reappear, sometimes ominously transformed. The small gardens from the first poem, turn into pale flowers—including a bloody one—in the second. Wine turns into blood. And we remember the evil flower when we read about the Belladonna (deadly nightshade), about murder, venom and death in the third poem. (Ironically Hebbel uses the Latin word "Belladonna" instead of the German "Tollkirsche". And I never met a red variety; those deadly berries are pitch black.) 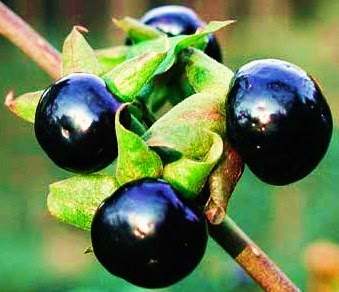 (Red perhaps blends better with the "serpent's greenish eyeball" and the "swarthy ground".)

In the last poem the abode becomes a grotto, the mother a maiden, whereas the buzzing beetle reminds us of the whistling mocking bird from the second poem.

Strangely though, in spite of these many cross references, we are unable to derive at a clear story of what happened or is going to happen. The "Situation" ends with a "cliffhanger". (The scene, by the way, feels like out of a Western film—something like "High Noon", perhaps.) Will the poacher kill the huntsman? And will this be the murder that our narrator wants to avenge in "Evil Place"? The chronology seems odd. Is the narrator of "Evil Place" still the same one as in the first poem? It certainly seems so. But is he also the "parson" in "Thick Forest"? The meter here suddenly changed to a vigorous trochee, perhaps inspired by all those refreshing dangers of the wild forest: "Ha! Here shall one gain in vigor".

But who is that parson? Is he the brother of the huntsman? Did the poacher kill the huntsman or vice versa, and is that angelic abode perhaps the home of one of them. We get a little scared about that noise in the first poem, when we believe the husband of our "angel" to suddenly return.

We do not know the answer to any of these questions and we shall never. This is no detective story to test our astuteness. No conclusion. We are left with a mysterious aftertaste. And Hebbel could be gruesome. Our deadly forest here is quite charming as compared to the "heath" in his "Heath Lad" (Der Heideknabe).

In comparison Schumann’s "forest" in his Waldszenen appears to be a gentler, a more idyllic place, or is it? The fourth "scene", "Verrufene Stelle" ("Haunted Spot"), the one with the two Hebbel stanzas, feels dangerously archaic with its double-dotted "funeral march" rhythm starting in pianissimo. Naturally it is in D minor, the key of the "underworld". The second piece, Jäger auf der Lauer ("Hunter in Ambush") had been in the same key. But the third piece, Einsame Blumen ("Lonely Flowers") features a section in G minor and we are likely to be reminded of this when the "Verrufene Stelle" opens. 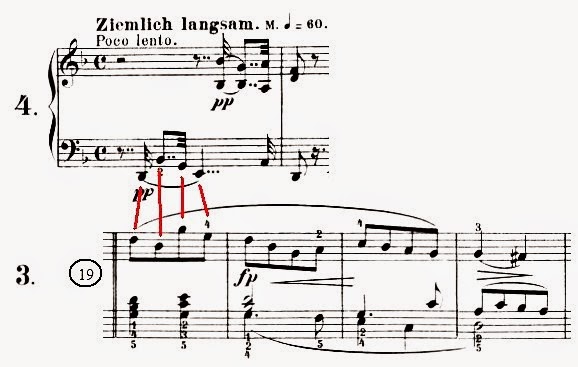 Perhaps it is not incidental that the "evil" red flower is preceded by "Lonely Flowers", as in Hebbel’s "Forest Pictures" it flourishes amongst the pale ones. Schumann’s "Lonely Flowers", unlike those deadly pale ones of Hebbel, appear to be simple and graceful, but they are alluded to in Verrufene Stelle: 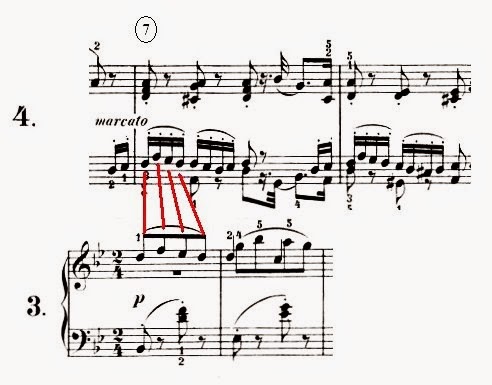 Hebbel’s "Evil Place" ends with the whistling "mocking bird" mocking the narrator for just "killing" a flower in revenge of his (or her?) brother. Surely Schumann did not end Verrufene Stelle with a mocking bird, or did he? Perhaps not. The penultimate measure though seems to foreshadow the seventh scene, "Vogel als Prophet" ("Bird as Prophet’). 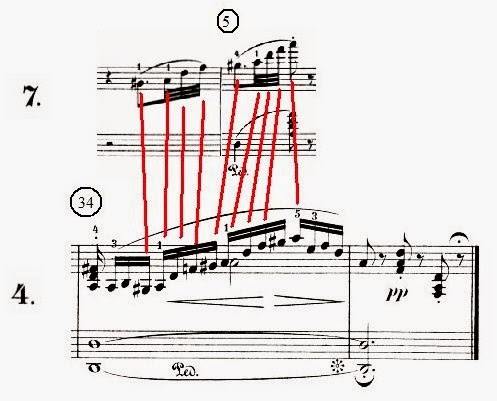 Many more cross-references can be found in the nine Waldszenen, for ex. between Freundliche Landschaft ("Friendly Landscape" or "Pleasant Landscape") and Herberge ("The Lodge" or "Inn"): 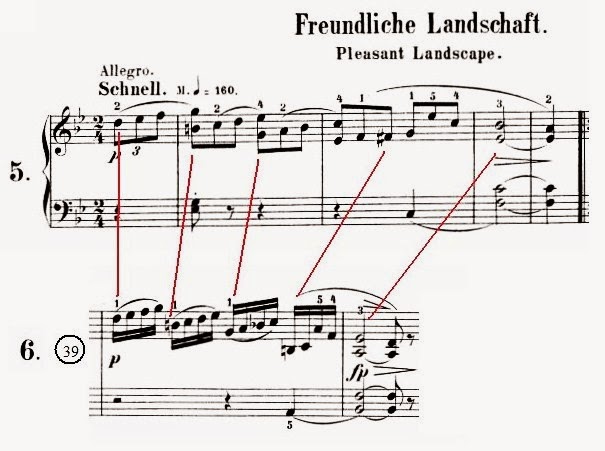 or between the openings of Eintritt and of Abschied, the first and the last piece: 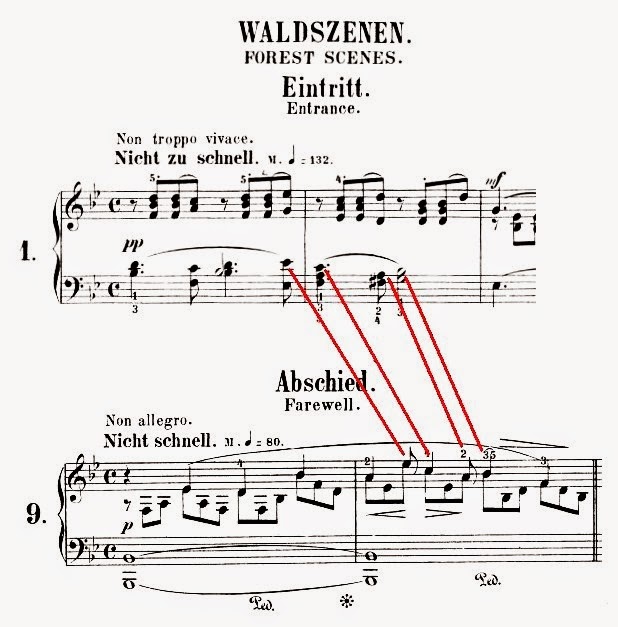 Like the poems of Hebbel’s "Forest Pictures", Schumann’s scenes are fragments, fugitive visions of the idyllic, the demonic, the energetic, the prophetic aspects of the forest. The cycles, Hebbel’s and Schumann’s, each achieve mysterious unity through evocative symbols, allusions and references.

And here are the original German Waldbilder: